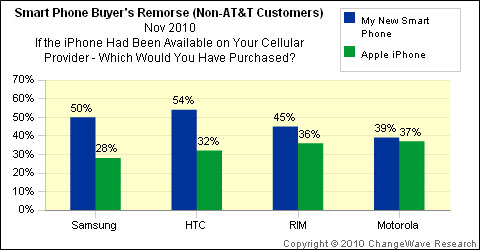 Satisfaction was another focus of the survey, and Apple came out on top again. No less than 77 percent of iPhone owners are "very satisfied" with their phones. The next closest manufacturer is Motorola, with 71 percent of owners in the same category. Samsung and RIM trailed the pack with just under half of device owners saying they were "very satisfied."

ChangeWave points to the results as evidence that the iPhone still represents a significant threat to competitors in the smartphone market. Sales are sure to jump through the roof when the iPhone moves to additional US cellular carriers. This latest survey quizzed 1,212 people who purchased smartphones within the last six months.