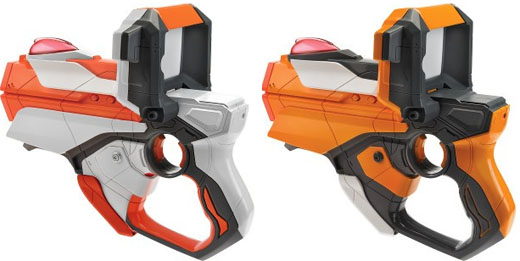 What sounds almost too good to be true is the multi-player mode. Up to 24 players can join the field of play and each blaster has a range of up to 250 feet. The laser beam is visible on the augmented reality display, which also keeps track of stats for a leaderboard. Battery power remaining is tracked and upgrades can be unlocked based on performance, such as better gear and firepower.

What's great is that the game is completely immersive and gets people off the couch. The question is whether or not iPhone insurance companies will continue to cover damage inflicted by smashing an iOS device during physical activities for which the smartphone was not designed.

Several competing laser tag concepts are in the works as well, including the open-source AppTag and XAPPR gun with multiple games. Hasbro will launch the latest iteration of Lazer Tag in August with a two-blaster set running $70.