How to Control Music with Banner Notifications

Everest is a jailbreak tweak that offers a new way to control the stock Music app or Spotify tracks. Once installed, any Activator gesture can be used to invoke a banner notification. Inside this banner is the title of the current track, and a small thumbnail of album artwork. 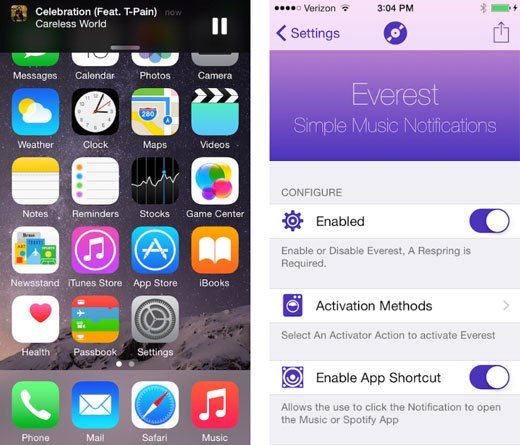 Music can be controlled from directly within the banner. Pause or play is accomplished by tapping the button, while skipping tracks forward or backward involves a swipe right or left. Tapping the song name will open the app which is currently playing music.

Everest does basically the same thing as the music controls in Control Center, however the ability to customize an Activator gesture can make it convenient for heavy Music or Spotify users. Settings include a few options including a toggle to disable the tweak entirely. The tweak can even be configured to show a banner every time the track changes.

Everest is available from the BigBoss repository on Cydia for $0.99. To start customizing iOS, click here for instructions on how to jailbreak iOS 8.1 with Pangu. Those with older firmware can check here for details on jailbreaking iOS 7.0 with evasi0n 7. The previous release of Pangu will jailbreak devices running iOS 7.1. Find out how to purchase and install Cydia tweaks with this guide.