2K and Gearbox Software have just announced a extremely limited collector's edition for its Borderlands: The Handsome Collection coming to the PlayStation 4 and Xbox One. The $400 "Claptrap-in-a-Box Edition" not only includes the definitive versions of both Borderlands 2 and Borderlands: The Pre-Sequel, but it also ships with a remote-controlled Claptrap. 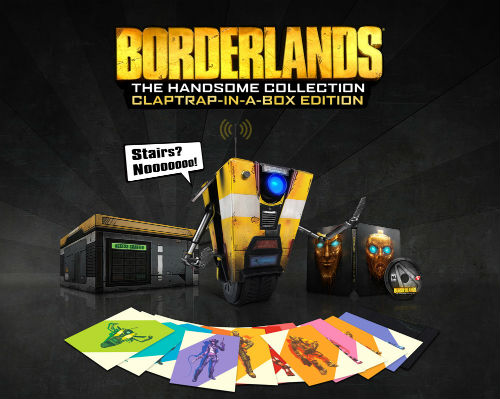 The Claptrap figure features PCB gyro technology so it can balance on one wheel and a real working camera is his eye. Users can see Claptrap's POV from the camera and control it from any iOS or Android mobile device using the official Claptrap app. The Handsome Collection also ships with 12 exclusive lithographs and a collectible steel case.

Of course, as with most limited editions these days, pre-orders for the Claptrap-in-a-Box Edition are sold out everywhere. You can sign up for free email, desktop and mobile alerts (App Store Link) here.

The basic Handsome Collection without all the extras is available for pre-order for $59.99 at Gamestop (PS4 link, Xbox One link).

Borderlands: The Handsome Collection will be available on March 24, 2015.

The Claptrap Edition is limited to only 5,000 units worldwide.

Borderlands: The Handsome Collection is the essential Borderlands compilation and includes the definitive versions of both Borderlands 2 and Borderlands: The Pre-Sequel, built specifically for next-gen consoles. PlayStation 4 and Xbox One customers will experience the absolute highest performance and highest fidelity graphics for any Borderlands game ever played on a video game console. For the first time in the franchise's history, play four-player split screen on a single television, all in stunning high definition. Experience the entire Handsome Jack saga from his not-so-humble beginnings to the heights of his egomaniacal tyranny.