Locking out parts of the iOS Photos app is now possible thanks to the jailbreak tweak Photego. With Photego installed, a variety of photo-related functions can be secured. Once they are locked, access to these functions is only possible by using Touch ID authentication. Photego is capable of preventing album access, photo deletion, sharing, and more. 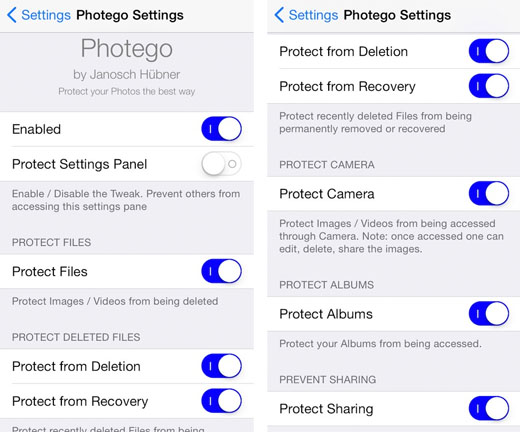 Once installed, the tweak can be configured under Settings -> Photego. In addition to a toggle that disables the tweak entirely, Photego can lock out its settings pane for unauthorized users. The list continues from there, with an option to protect images and videos from being deleted. The Recently Deleted folder can also be protected from permanent deletion, and images in the Recently Deleted folder can be prevented from recovery. 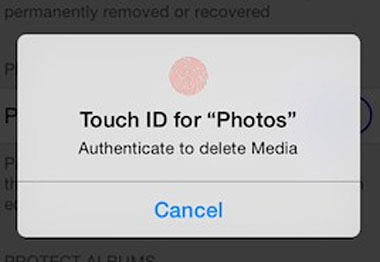 Each time a protected activity is performed, the user will be prompted to authenticate using Touch ID. Images and videos can be protected from access via the Camera app. Photego users also have the option of protecting Albums and preventing their photos from being shared from the Photos app. As opposed to locking out the entire Photos app from prying eyes, Photego makes it possible to control different levels of access within the app. Photego requires an iPhone 5s or later running iOS 8.

Photego is available from the BigBoss repository on Cydia for $0.99. To start customizing iOS, click here for instructions on how to jailbreak iOS 8.0-8.1.2 with TaiG. Those with older firmware can check here for details on jailbreaking iOS 7.0 with evasi0n 7. Pangu will jailbreak devices running iOS 7.1. Find out how to purchase and install Cydia tweaks with this guide.