FIFA 15 Ultimate Team Gets its Own Apple Watch Companion App 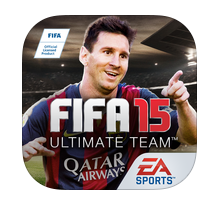 Video games were obviously not a top priority when Apple was designing its new Watch, but quite a few developers have still been able to come up with some interesting titles for the wearable device. Tiny Tower creator NimbleBit has released an Apple Watch word game, Letterpad, and Everywhere Games plans to release an Apple Watch RPG, titled Runeblade, later this month. Even EA has figured out a way to add Apple Watch support to its FIFA simulation app.

The FIFA 15 Ultimate Team Apple Watch companion app allows users to manage their team on the fly by tracking their top 5 player transfers right from their wrist. Users can also receive notifications about player transfers directly on their Watch.

Future Apple Watch owners can download the FIFA 15 iPhone app with the companion app from the App Store for free starting today.

The regular FIFA 15 iOS app has been updated with a new "Best Line-Up" feature which alerts users if they have a better starting player on their bench. The game has also received a few simulation mode tweaks and new tactic options.

FIFA 15 Ultimate Team allows soccer fans to create their own club by collecting players from over 500 licensed teams. The game features more than 10,000 players, 30 real leagues and all their stadiums. The app is free to download but it does feature in-app purchases.