iOS App of the Week: Does Not Commute 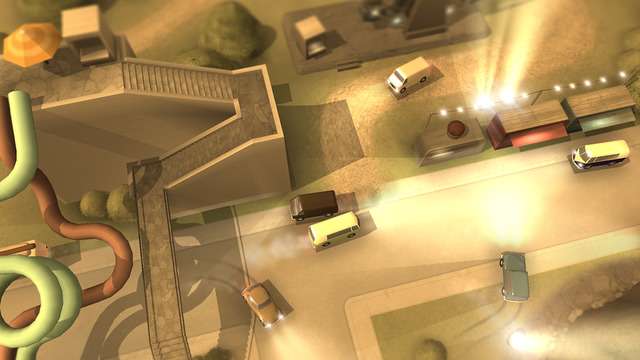 It's nice to know that Mediocre Games is focused on making unique titles for an Apple App Store that is bogged down by too many endless runners and free-to-play building games. Does Not Commute is a driving game like no other diving game currently available for iOS devices. The goal of the game is simple, just steer your vehicle through a small town during the 1970s, but achieving this goal is not easy at all.

Does Not Commute is a lot like Medicore Games last release Smash Hit, in that the game starts off very relaxing but quickly devolves into chaos. Medicore are experts at mixing simple controls and ambient music with intense gameplay which offers a fun and relaxing but challenging experience to the player. Does Not Commute ups the ante with its inherently different premise where the goal of the game is to stay out of your own way.

Each level of the game begins with a timer and one car that you must help get from point A to point B as quickly as possible. To do this you just tap left or right to steer the car through the neighborhood. That's all you have to do. There are no obstacles, bombs or aliens to stop you. Hitting the scenery does slow you down, but who you really need to avoid is yourself. Every time you successfully get a vehicle to its destination another one is added to board at the original time frame of the first vehicle. You then have to navigate the next vehicle around the path of all the previous vehicles over and over until there are so many incarnations of yourself driving around that things become tricky. Even though you keep returning to the original starting point of the game the timer doesn't reset until you begin a whole new level.

If you mess up, and you will, you can rewind the last car at a 1-second penalty, and you can pick up bonus time icons and other boosts to help you along the way.

Does Not Commute is free-to-play but it will cost you $1.99 if you want checkpoints. This a great model because some people may find the game boring after a few plays. Other gamers who get sucked into the challenge and story of the game will most likely want to buy the premium version after a few attempts.

Does Not Commute is available now on the App Store. It supports all devices running iOS 6.0 or later. Here is the official App Store description and launch trailer in case you are still confused about the game.

"A strategic driving game from the award-winning maker’s of Smash Hit. Does not Commute is a temporal paradox in which you have no one to blame but yourself. What starts out as a relaxing commute in a small town of the 1970's quickly devolves into traffic chaos with hot dog trucks, sports cars, school buses and dozens of other vehicles. You drive them all. Plan ahead. Don't be late."