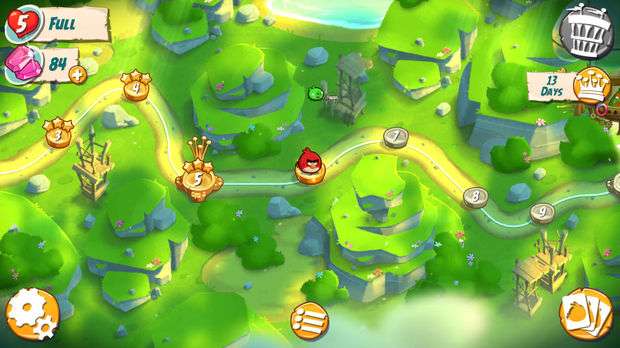 After ten sequels and a handful of spin-offs it is hard to believe that the Angry Bird franchise has not run out of steam, but Rovio's disgruntled birds have managed to once again top the mobile gaming charts. Angry Birds 2 is currently the number one free game on the Apple App store, and it has already been downloaded over one million times since it was launched on Thursday. Not only has the sequel climbed its way to the the top of Apple's charts, but it is this week's Editor's Choice, and it has been earning good reviews from both critics and fans.

If you have grown tired of Angry Birds anytime during its six-year reign, then you will probably want to avoid Angry Birds 2 because it is full of the same addictive slingshot antics as the original. The sequel of course includes several new features, such as being able to select the bird you want to fling at the pigs, new multi-level stages and bigger and better graphics. Angry Birds also includes "outrageous" spells and support from other popular Angry Bird characters, like the Mighty Eagle, to help you pummel the piggies and their towers.

Angry Birds 2 is the thirteenth mobile game to be released in the franchise, but the only true sequel to the original title that started it all. Rovio Entertainment has managed to release an Angry Birds games for almost every popular mobile gaming genre, such as RPG, racing and even a shoot'em up title. There is basically an Angry Birds game available for everyone on the App Store, Google Play and Facebook.

Angry Birds 2 is available on the Apple App Store for free. It supports all devices running iOS 7.0 or later, but it is recommended for the iPhone 5, iPad 3, iPad mini 2 and iPod Touch 5 or newer.

I blog often and I seriously thank you for your information.
Your article has really peaked my interest. I will take a note of your site
and keep checking for new details about once
a week. I subscribed to your RSS feed too.