iGolfrules: Another Reason to Bring Your iPhone on the Golf Course

Settle the dispute with your golfing buddies on the spot, and learn a thing or two about the ever-complicated Rules of Golf. An iPhone and iPod Touch version of the award winning "Golf Rules Quick Reference" has been submitted to Apple for approval. 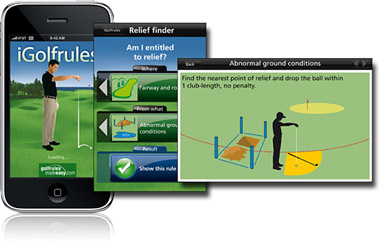 The developers are expecting the application to be available on the iTunes App Store in February for $9.99. The author of the booklet, Yves C. Ton-That, has been an international rules official for over 10 years and spent 4 years developing the reference.

iGolfrules is organized into menus based on the position of the ball. Headlines under each section describe different situations and the user is instructed as to the proper answer or procedure with text and illustrations or an animated slide show. The software also has a “Relief Finder” feature that will tell the player instantly if they are entitled to free relief.

The price includes all rule updates until the end of 2011. iGolfrules will initially be available in four languages: English, German, French and Spanish, with more in the works.

Golf Digest has called the "Golf Rules Quick Reference" the "best effort yet to decipher the Rules of Golf," and the reference won Best New Product at the PGA Merchandise Show. If you don't want to spend the money on an iPhone, the paper version is available for $9.95.