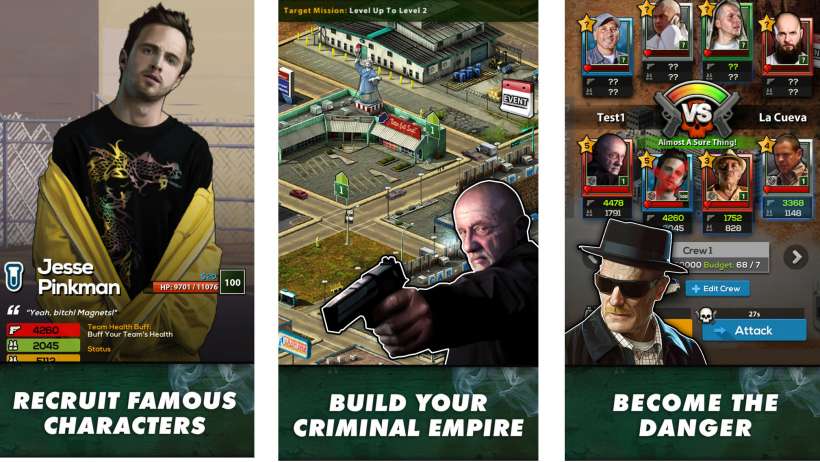 A mobile game based on the hit AMC television series, Breaking Bad, has been spotted on the Australian App Store. A Touch Arcade forum member made a post about Breaking Bad: Empire Business on Sunday, but it appears that the game has been available for a few months. As with most TV show related apps, Empire Business is a free-to-play building title like The Simpsons Tapped Out, but instead of rebuilding Springfield your goal is to build your own criminal empire. The game features popular characters from the television show, including Walter White, Jesse Pinkman, Gus Fring and Saul Goodman. Here's a blurb from the official App Store description:

"Breaking Bad: Empire Business unlocks your inner Heisenberg as you pursue the dark American dream. Choose your personal path to riches, power, and respect. Recruit your favorite characters from Breaking Bad, and outwit the DEA, the Cartel, and players from around the world. Build an empire one cook at a time; from small time operator to domination of the criminal underworld in the 'Land of Enchantment.'"

You begin the game as a lowly meth dealer and work your way up through the ranks of the criminal empire while recruiting your own famous characters to aid you. The game features the ability to train and upgrade your recruits and own skills while you outwith the DEA, deal with the Cartel and make important alliances with those who can help you become a drug kingpin.

The official App Store description promises the game "captures the tone, dialog, and story that you love about the show" and notes it was "created in collaboration with the show writers and creators."

Unfortunately, the Australian App Store version currently has a low two star rating, but the game has only been soft launched in few territories, so there is still room for improvements.

Breaking Bad: Empire Business was recently updated to version 1.30 with new features such as more combat tactics, world map bosses and more. You can see the full App Store description and release notes here. It is unknown if and when Phase One Games will give the game a wider release, but it may be soon now that the rest of the world has noticed it.