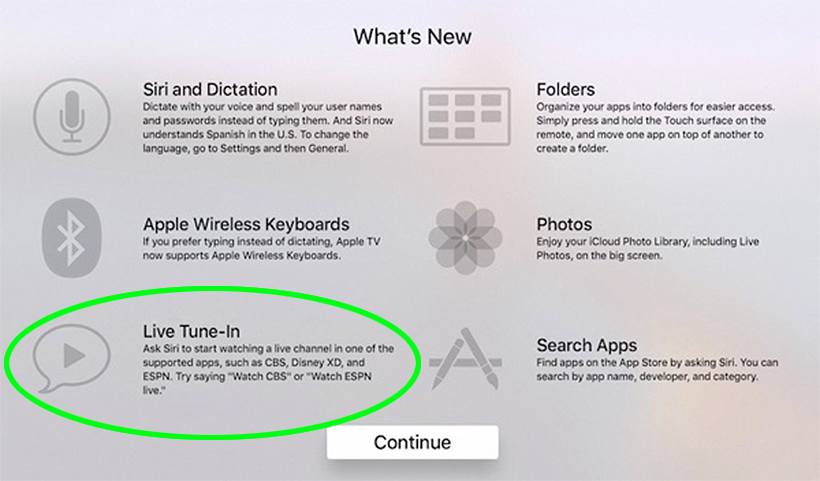 Apple TV fans are still waiting for a live streaming package, which failed to materialize last year despite rumors of ongoing negotiations with content providers. Even as Apple continues to pursue such a subscription package, a new Live Tune-In feature has been added to tvOS 9.2. Live Tune-In combines certain apps that provide a live stream with Siri, to offer instant live viewing of supported channels.

To use the feature, simply ask Siri to watch a channel. If the live streaming option exists, the app will open automatically. Despite the simpler access method to pull up live channels, some apps require authentication with cable provider credentials before live video can be displayed. In other words, to watch most live TV you still must subscribe to a cable, fiber optic or satellite television package.

No doubt the list of supported channels will continue to grow, as Apple ties Siri into more apps that offer live video streams. The current list of Live Tune-In channels includes the following networks:

Reports have pointed to an Apple web TV service in negotiations, which could offer around 25 live streaming channels to Apple TV owners for a fixed price. The package was expected to cost $30-$40 per month, however any launch of the service has been stalled. Rumors indicate content negotiations between Comcast and Apple have not gone well, which would leave content from Comcast subsidiary NBCUniversal off the table.

Should Apple's live TV package become a reality, it would likely be available on the Apple TV as well as on all iOS devices.