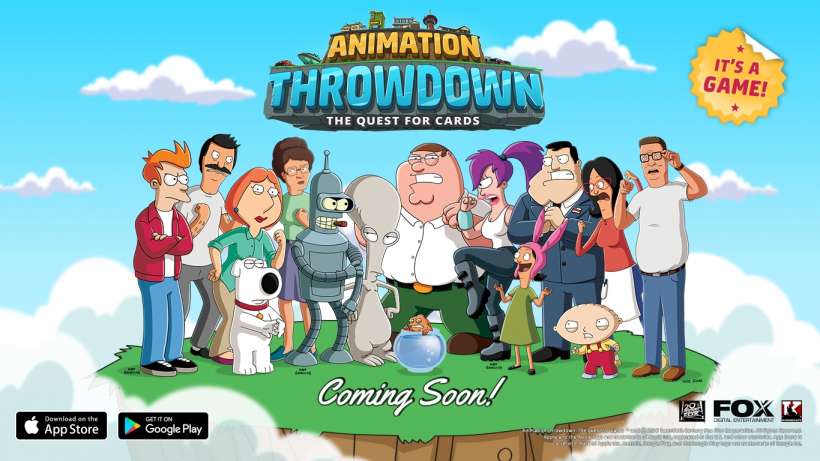 Kongregate and Fox Digital Entertainment announced on Monday that American Dad!, Bob’s Burgers, Family Guy, Futurama, and King of the Hill will all be represented in its new collectible card game for mobile devices. Animation Throwdown: The Quest for Cards is the ultimate crossover with characters from all five animated comedies being represented.

“We are thrilled to bring together these five animated comedies for the first time in Animation Throwdown: The Quest for Cards.” said Emily Greer, president and co-founder of Kongregate. “We are looking forward to integrating characters from these hit series in a unique and exciting way that fans of all the shows will really love.”

In the game players will be able to select an all star lineup of their favorite characters, such as Peter Griffin, Bob Belcher and more. Kongregate didn't release any more specifics about the game, but did note it would be released to iOS and Android in Q3 of 2016.

Some mobile gamers are already praising Fox for trusting Kongregate with its animated IP, instead of choosing a bigger developer like EA. Most games based on popular series, like The Simpsons, normally end up as boring IAP heavy money grabs on the App Store. Gamers have their fingers crossed that this will not be the case with Animation Throwdown, but I wouldn't hold my breath. Kongregate's popular App Store titles, such as AdVenture Capitalist, are frremium games with IAPs. It is probably safe to assume that Animation Throwdown will also be a free download, and not a premium title.

Kongregate is a popular mobile and web game developer owned by GameStop. The Kongregate web portal features thousands of free games and is visited by tens of millions of visitors each month. You can check out Kongregate's free web games at kongregate.com and learn more about Animation Throwdown via the official game page.