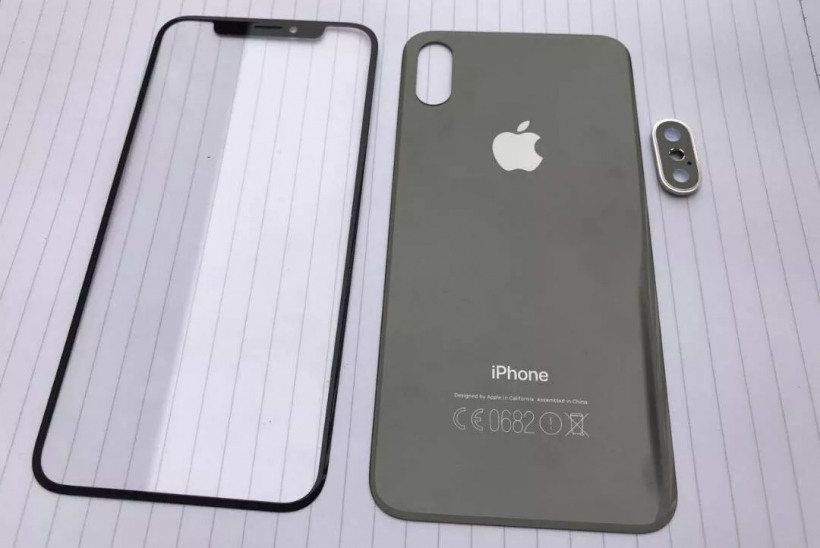 September is quickly approaching, along with Apple's latest iPhone launch. As leaks keep coming in, Apple looks ready to launch three new models this fall. While the iPhone 7s and iPhone 7s Plus will receive modest updates, the real story is the flagship 10th-anniversary iPhone 8. According to Nikkei Asian Review, Wistron CEO Robert Hwang has confirmed two rumors regarding the upcoming device.

Wistron assembles iPhones for Apple, and his comments point to improved waterproofing and wireless charging in the latest designs:

Assembly process for the previous generations of [iPhones] have not changed much, though new features like waterproof and wireless charging now require some different testing, and waterproof function will alter the assembly process a bit.

Leaked iPhone 8 parts pictured above show a glass back panel, part of a glass and stainless steel "sandwich" design evoking the iPhone 4. The glass makes wireless contact charging possible, simply by placing the iPhone on an inductive charging surface. Leaked schematics have also shown placement of Qi wireless charging coils inside the device.

When it comes to waterproofing, the iPhone 7 features an IP67 rating. Hwang seems to corroborate previous reports that the iPhone 8 will improve this rating to IP68. The jump from IP67 to IP68 means the iPhone 8 can be submerged for 30 minutes in up to 5 feet (1.5 meters) of water, whereas the iPhone 7 is only rated for 3 feet (1 meter).

Also of note in the component photos above is the lack of a front bezel. With only a small cutout at the top of the device, the iPhone 8 will feature an edge-to-edge OLED display. The Touch ID sensor is said to be embedded directly in the display. Also, the vertical camera assembly shown will include 3D depth sensing lenses for new imaging capabilities.

The 10th-anniversary iPhone has also been referred to the iPhone X and the iPhone Edition. Look for more information in the upcoming weeks, as Apple prepares for the launch of next-generation iPhones and iOS 11.