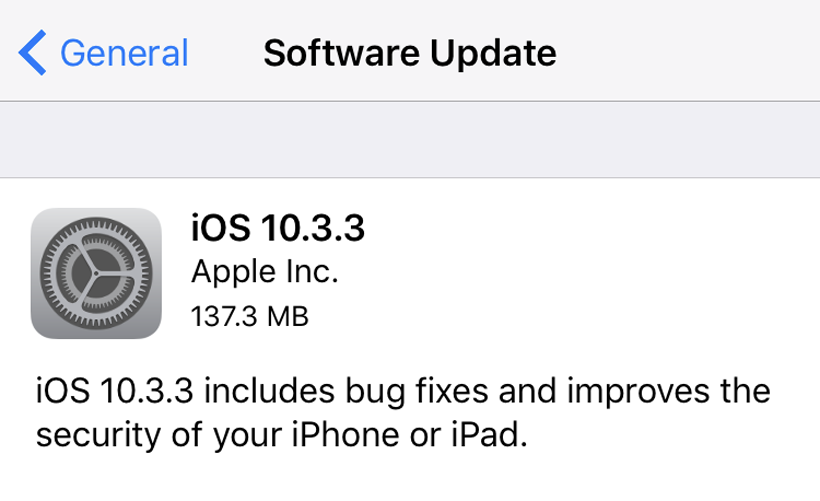 With little fanfare, Apple released the latest version of iOS this week. iOS 10.3.3 comes over two months after the rollout of iOS 10.3.2, which itself was a minor update to fix bugs. As usual, iOS 10.3.3 can be installed over-the-air (OTA) or by using iTunes on a computer. Many iPhone owners are wondering if they should bother to install iOS 10.3.3 or just wait for iOS 11.

In a nutshell, all users are recommended to update to iOS 10.3.3. The latest firmware contains numerous security fixes and bug updates, which can be found in detail at Apple's support site. Most notably, the firmware protects against the Broadpwn Wi-Fi exploit, which is considered a critical vulnerability. Broadpwn was recently patched on Android devices.

In theory, iOS devices not running iOS 10.3.3 are vulnerable to nearby hackers taking over their Broadcom Wi-Fi chips. Broadpwn is considered dangerous, with the National Institute of Standards and Technology (NIST) rating it 9.8 out of 10 on its threat scale. Other parts of iOS are also patched by the update, deploying several security enhancements to apps including Safari and Messages.

iOS 10 is not likely to receive further updates, barring a significant security threat. iOS 11 is slated to bring many new features to iPhone owners, such as a customizable control center, Do Not Disturb mode for driving, and Siri translation among others. iPhone owners can install the iOS 11 public beta now, however since it is a work in progress it could bring operating bugs or increased battery drain.

Look for iOS 11 to launch this fall, alongside the iPhone Edition and the iPhone 7s.