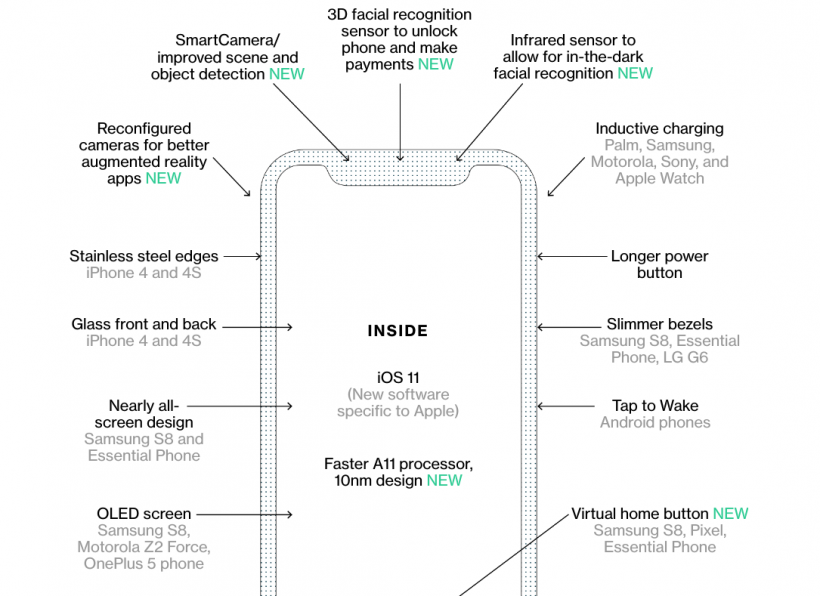 Apple isn't known for being first. The iPhone-maker is known for its patience in launching new technologies that have already been tested by its competition. This is what makes Apple products standout from the rest. Your iPhone may not be first to ship a new cutting edge technology, but it will feature the best version of of that technology when Apple decides to adapt it into its hardware or software.

The iPhone 8 is no exception. Bloomberg today released a new mock-up of the iPhone 8 tagged with all its upcoming rumored features and which of Apple's rivals had them first.

"Due out this fall, the new smartphone arrives with lofty expectations. After all, this is the 10th anniversary of the original iPhone, a gadget that upended the industry and created an ecosystem of apps and accessories. However, the new iPhone won’t be a case-study of innovation, more a matter of perfecting features that are already out there in rival devices. Time and again, Apple has followed this “best, not first” philosophy, seizing on technologies and features bungled by rivals and implementing them well enough to spur widespread adoption."

The image shows off several expected features to debut on Apple's next-generation device, including facial recognition, an edge-to-edge OLED screen, inductive charging and a virtual Home button. The article also points out that Samsung and other Android devices already include most of these features.

None of these specs have been officially confirmed. They are a collection of rumors, analyst predictions and leaks compiled by Bloomberg. In July, Apple accidentally published the firmware for its HomePod smartspeaker which is set to launch in December. This allowed developers to analyze the code and discover some hints about the upcoming iPhone 8, including its 4k video capabilities and virtual Home button.

The iPhone 8 is expected to launch sometime this fall, possibly September, alongside iOS 11 and rumored iPhone 7s and 7s Plus.