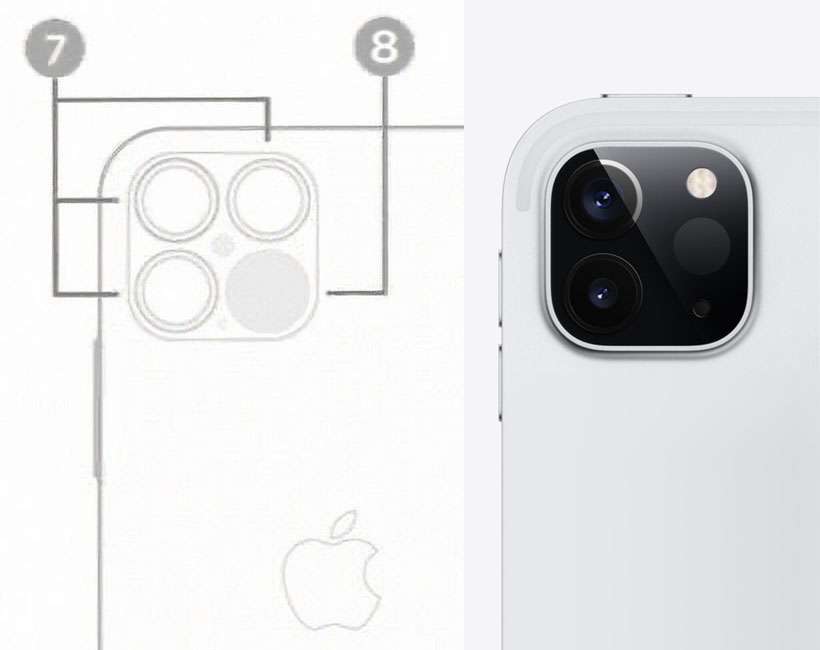 Hot on the heels of the recent iPad Pro refresh, the upcoming iPhone 12 Pro looks to have similar advanced imaging equipment on board. The picture above shows an iPhone 12 Pro support manual diagram (left) alongside the imaging cluster on the newest iPad Pro. Leaks have all but confirmed that the iPhone 12 Pro features a three-camera optical imaging system (7), with a fourth sensor devoted to LiDAR (8). Light Detection and Ranging has already come to the 2020 iPad Pro, promising to improve augmented reality (AR) and beyond.

LiDAR works by measuring distance between the iPhone and objects around the room. On the iPad Pro, the LiDAR scanner is capable of mapping surrounding objects up to 16 feet away in three dimensions. Once this data is collected, apps can deliver best-in-class AR experiences, or solve problems that developers have yet to even tackle.

The LiDAR scanner uses the direct time of flight to measure reflected laser light off of objects within range. Apple explains that its LiDAR component "works at the photon level, operates at nanosecond speeds" and works with the cameras, motion sensors, and frameworks in the operating system to measure depth. According to Apple, its on-board mobile LiDAR brings unprecedented innovation to mobile devices.

LiDAR is being used by NASA for the next Mars landing mission, and has been utilized for some time on satellites to collect 3D data from the surface of the Earth. Now it's been miniaturized to fit inside a smartphone like the iPhone 12 Pro. Leaks have pointed to a four-lens setup for the main camera area on the iPhone 12, with the forward-facing "notch" shrinking in size compared to previous models.

The iPhone 12 Pro and iPhone 12 Pro Max are expected to launch starting in September 2020. In addition to a LiDAR scanner and iOS 14, the upgraded devices will feature new processors, 5G network connectivity, OLED displays, and wireless charging. The case design is rumored to emulate the iPad Pro, with square edges akin to the iPhone 4 series. Apple is also expected to launch an updated iPhone SE model this spring.