The crippling of Bluetooth functionality on the iPhone is another one of life's mysteries. As users are painfully aware, the only thing Bluetooth is capable of doing in firmware 2.2 is connecting to a wireless headset. Fortunately for those with jailbroken devices it appears that all of this is about to change.

One of the still outstanding "head scratchers" regarding the Apple iPhone is the continued lack of support for the A2DP Bluetooth profile. Considering the iPhone's roots are in the iPod, a stereo music player, it is quite astounding that as we sit here already up to iPhone firmware 1.1.1, there is still no native support for A2DP. The good news is that this doesn't mean A2DP is unavailable to iPhone users.

For those of you unfamiliar with A2DP (Advanced Audio Distribution Profile), A2DP is a Bluetooth profile that allows for the wireless transmission of stereo audio from a source (i.e. a phone or computer) to an A2DP receiver (a set of Bluetooth headphones or stereo system). 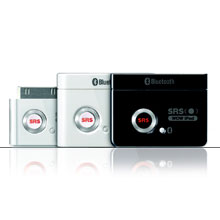 Back to the good news. Though the iPhone itself does not support A2DP directly (at this time), all iPhone owners can still

The Bluetooth version of the Jawbone headset from Aliph is one of the best selling and highest rated BT headsets on the market. Though also marketed as the stylish man's Bluetooth headset, the Jawbone is sold mainly based on lofty claims made by manufacturer Aliph about the Jawbone's noise reduction/elimination technology. According to Aliph, this "revolutionary Noise Shield technology combines the latest innovations in acoustics, audio processing and product design to produce a quantum leap in headset performance."

Outlets such as CNET (who gave the Jawbone it's highest ever ranking for a Bluetooth headset), Walt Mossberg of the WSJ, and the Financial Times have already given the Jawbone rave reviews. Regardless, I was skeptical. You see, I've tried many other Bluetooth headsets that were positively reviewed. However, I've never found one of them the least bit useable or practical. Sound quality is always lousy (both in and out), pairing is often difficult and unreliable, and most headsets are downright unwearable because of comfort or fit issues.

So, I figured I'd give the Jawbone a try.

When the package arrived, I was certainly eager to give it a shot. The Jawbone lures you in with it's