The popular tower defense game Kingdom Rush: Frontiers is getting a major update. Ironhide Studios has listened to its iOS fans and is adding all new levels, enemies and heroes on August 1st. Unfortunately, Ironhide disappointed other fans of the franchise by once again snubbing Android, Flash and Steam users. However, the developer did address the controversy via its official Facebook page on Friday:

"Hi everyone! We are working very hard to deliver the Android, Flash and Steam versions as soon as possible. Your feedback is always welcomed and very useful for us. Stay tuned for more news and surprises! Thank you for being part of our awesome community!"

Demand for Android, Flash and Steam versions of the game has turned into an outright flame war on all Ironhide's social media pages. Hopefully those fans will get a chance to enjoy Frontiers soon, because it is a shame that anyone is being left out of all the fun.

You can "help Indiana find the secret passage" on stage 11 Temple of Sagra. Indiana will appear on the roof of the right hand side building. Quickly push the tiles on the wall in this order: Second tile, First tile, then Third tile. This will open the secret passage and crush the bed of Parasyte eggs. Don't mess up the order of the tiles, or you will release the little facehuggers, and no one wants to deal with them.

The "One Froggy Evening" achievement can be earned by catching the frog on level 3, "Sape Oasis". He will appear near the rock by the oasis on the top right side of the screen. Just click him when he pops up to make him sing, and you will earn the achievement. 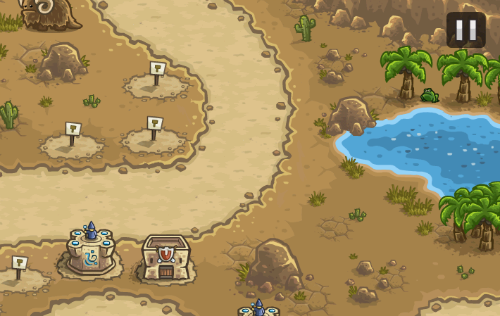 The mermaid can be found in the fifth world "Buccaneer's Den". She doesn't pop up frequently, so you'll want to earn this is achievement after you've defeated all three levels (Campaign, Heroic Challenge, Iron Challenge). Keep your eye on the left hand side of the screen, she pops up under the boat near its anchor. Quickly click her to earn the achievement.