There is nothing worse than waiting for the sequel to your favorite game, only to find out that the developer completely changed it. Kingdom Rush fans will be happy to know this is not the case with Kingdom Rush Frontiers. The sequel to the hit tower defense game features all the towers, monsters, power-ups and same gameplay as the original. Ironhide Game Studios delivered exactly what fans wanted, a bigger and badder version of Kingdom Rush. Fans of the original are going to want to download the sequel as soon as possible, and tower defense junkies are not going to want pass this one up. Kingdom Rush Frontiers is the best iOS tower defense game I have played this year. 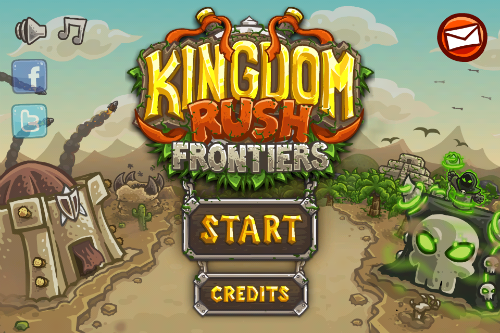 Kingdom Rush Frontiers features all new levels, Easter eggs, side missions, monsters and tower upgrades. New features include the addition of heros that you can unlock and upgrade, and a shop for buying helpful items to aid you in battle. There are three free heros, who were previewed before the game's release, and five heros you can buy. It does kind of suck that you don't have access to all the heros after paying $3 for the game, but $3 is pretty cheap for a game of this caliber, and everything else is free.

Ironhide Game Studios has released the official Kingdom Rush Frontiers trailer. Frontiers is the sequel to the highly popular tower defense game Kingdom Rush. The gameplay for Frontiers looks unchanged, but the trailer reveals all new terrains, towers and enemies like giant scorpions and evil genies. The game also features three new heroes that were previously showcased in their own individual videos.

Kingdom Rush and Kingdom Rush Frontiers are tower defense games set in the Medieval times. In the original game, players must use a combination of towers, and magic spells to defeat armies of goblins, trolls and other mythical creatures. Kingdom Rush is considered one of the best tower defense games ever released. The original is available for the iPod touch, iPhone and iPad for $0.99. There is also an HD version available for the iPad.

Ironhide Game Studios has release three videos showcasing the new heroes of Kingdom Rush Frontiers. The first hero is MIrage, who is described as a "fancy but deadly assassin who loves shopping for bad guy heads, getting razor sharp kunai manicures, and switching boyfriends with her shadow clones".

Alric is a fearsome warrior, and Cronan is the King of the jungle and wild beast master. You can see each new hero in action via these new Kingdom Rush teasers.

Ironhide Game Studio has released the first teaser trailer for Kingdom Rush: Frontiers. The game is a sequel the popular tower defense game Kingdom Rush. The trailer doesn't reveal much, but it does show all the original turrets (Mage, Archers, Barracks, and Artillery) from the first game. Ironhide said the "bigger, meaner and better" sequel will be released this fall.

In the original game players use a combination of towers, magic and upgrades to fend off armies of goblins, trolls and other monsters. The game is set set in Medieval times, and is considered one of the best TD games released for iOS and Android devices. You can download the original iPhone version for $0.99, or the HD iPad version for $2.99.