iPhone Dev-Team member MuscleNerd has posted a screenshot of his jailbroken iPod touch 4G. A bootrom vulnerability has been discovered by @p0sixninja that will make it possible to jailbreak all iOS devices running the latest firmware including the iPhone 4. Chronic Dev Team members are currently developing new jailbreak tools based on the vulnerability, otherwise known as SHAtter. 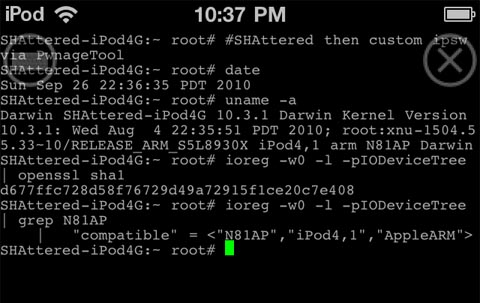 iPhone Dev-Team made news just a few days ago when they announced that the redsn0w jailbreak tool now works on iPhone 3G models running Apple firmware iOS 4.0 or 4.1. Currently the redsn0w tool is a beta release and only available for Mac OS X, although a Windows version is on the way. The iPod touch 2G can also be jailbroken with redsn0w.

Reports are buzzing about Greenpois0n being the name of the latest jailbreak. Many fake websites and false versions of Greenpois0n have cropped up, and some even have trojans or other malicious code. Beware anyone claiming to have an iOS 4.1 jailbreak for your iPhone, and never pay for software to jailbreak! Chronic Dev Team and iPhone Dev-Team will never charge for their software, and always announce their "official" jailbreak releases when the software has been tested enough for release.

Apple will have a hard time with the iPhone 4 jailbreak when it hits the streets. Unlike the recent JailbreakMe userland exploit, a bootrom vulnerability can't be blocked with a firmware update. Apple already closed down the issue that made JailbreakMe possible with the release of iOS 4.0.2.

Now that iPhone jailbreaking and unlocking has been legalized in the US, demand for an iPhone 4 jailbreak is off the charts. So far iPhone Dev-Team has not announced a release date. Now that the iPod touch 4G has been successfully jailbroken it's a matter of time until the software is adapted for the iPhone, improved and launched to the public.