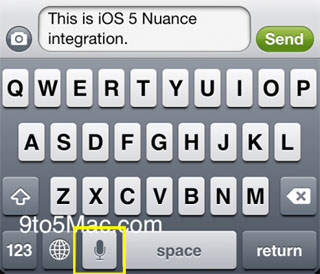 According to 9to5mac, the microphone button outlined in yellow above operates in a simple manner. Touching this key activates the speech-to-text function and iOS 5 listens until the user stops talking. Text is automatically entered into the text field. This component would appear to be only one aspect of an integrated voice control system.

Earlier reports show a built-in iOS Assistant could also be included in iOS 5 using technology from Siri and Nuance along with the iCloud. Speech can be sent to large servers for quick processing and ancillary data such as location can be corroborated with requests to answer questions on the fly. Crowd-sourced data collection can also quickly improve speech recognition on individual devices.

According to 9to5mac some of these voice control features will be iPhone-exclusive. If Apple rolls out integrated speech-to-text and voice recognition in the same manner as they launched Voice Control, new features could be limited to the iPhone 5. It remains to be seen if the new voice features will be ready for prime time with the iOS 5 launch just weeks away.

I'm running IOS5 beta 5 and can't seem to get the keyboard you show above.... any ideas on what has to be done to enable this???