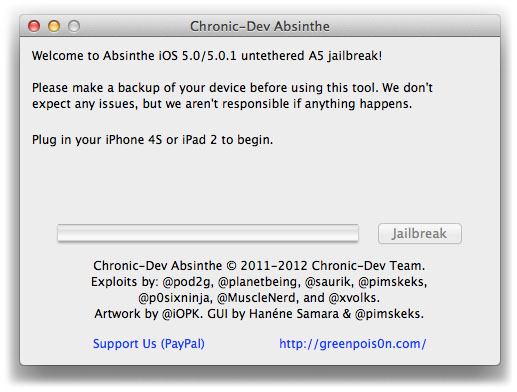 Absinthe jailbreaks the iPhone 4S running iOS 5 / iOS 5.0.1, and the iPad 2 running iOS 5.0.1. The iPhone Dev-Team is currently working on incorporating the A5 jailbreak procedures into an update to their popular redsn0w jailbreak tool.

You can visit pod2g's blog to donate directly to the iOS "dream team" for all of their hard work. Donations are not required, but they are appreciated by the developers who worked long hours to bring you this free service. The money also helps contribute to future jailbreaks and updates, and will be divided fairly among the team members.

For full instructions on how to jailbreak the iPhone 4S and iPad 2 with Absinthe click here.

Download the Absinthe software from greenpois0n.com or directly from these links: