Case manufacturer LifeProof today unveiled its newest waterproof iPhone 6 case at CES 2015 in Las Vegas, Nevada. The Fre Power is not only waterproof up to 6.6 feet, but it is also equipped with a 2,600 mAH battery, which LifeProof claims will double your iPhone's battery life. The backup also features “smart charging technology” that allows it to shut itself down when your battery is fully charged. 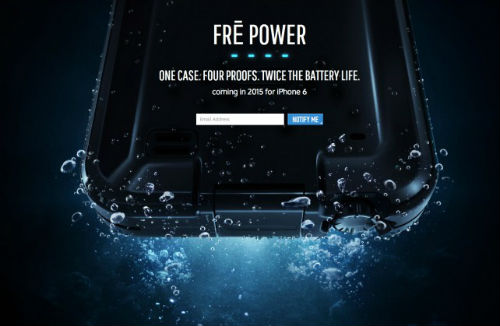 LifeProof also claims that its Fre Power case will protect your iPhone from falls as high as 6.6 feet, and that it is dust and snow proof. Pricing and availability are unknown at this time, but you can sign up for a Fre Power email notification at LifeProof.com.

There have been a lot of iPhone 6 cases announced at CES the last few days. Zagg, who are known for their lineup of invisibleSHIELD screen protectors, unveiled a new Bluetooth speaker case, and LifeProof's parent company OtterBox, announced that its own Resurgence case has been updated to fit Apple's new handset. You can see a list of some of the new iOS accessories that made their debut at CES 2015 here.

The Consumer Electronics Show (CES) is one of the world's largest international electronics and technology trade show. It runs from January 6th to 9th at the Las Vegas Convention Center in Las Vegas, Nevada.