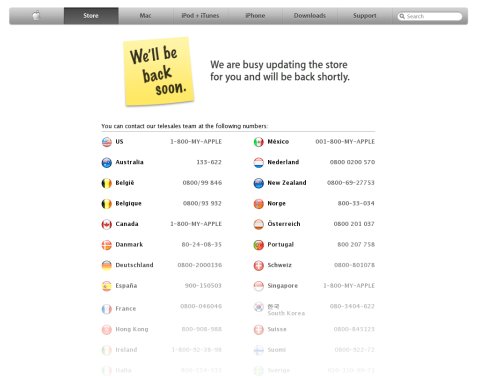 reporting for days that the iPhone 2.0 will be announced and/or released at the outset of today's WWDC, despite failing to possess concrete information confirming such. Even Wall Street has reacted to the buzz, anxiously awaiting the announcement.

Whether the 3G iPhone will be released today will be known in a very short time. Of course, like the rest of you, we're hoping it will. When it is, you can check back for all the specs and pricing details. As with the first generation iPhone, in the US the 3G iPhone will be available for purchase at AT&T Wireless retail stores and Apple retails stores. Rumors have indicated that the iPhone 2 may be available at a discount of up to $200 via AT&T due to price subsidizing which Apple is allowing on the new iPhone which it did not on the first generation model. A similar discount/subsidy situation is predicted via other national service providers such as O2 in the UK and Orange in France.

Whatever the case, we'll likely know more in an hour or so. Check back soon.

UPDATE (Jun 9 2:59pm): The WWDC is over and the iPhone will not be available for purchase immediately, but it's coming soon. Check out our coverage of the WWDC for more information on the release of the 3G iPhone.

So it looks like the release date for US is July 11th! I'm glad I found this site today as I was very close to buying a current one. Thanks!