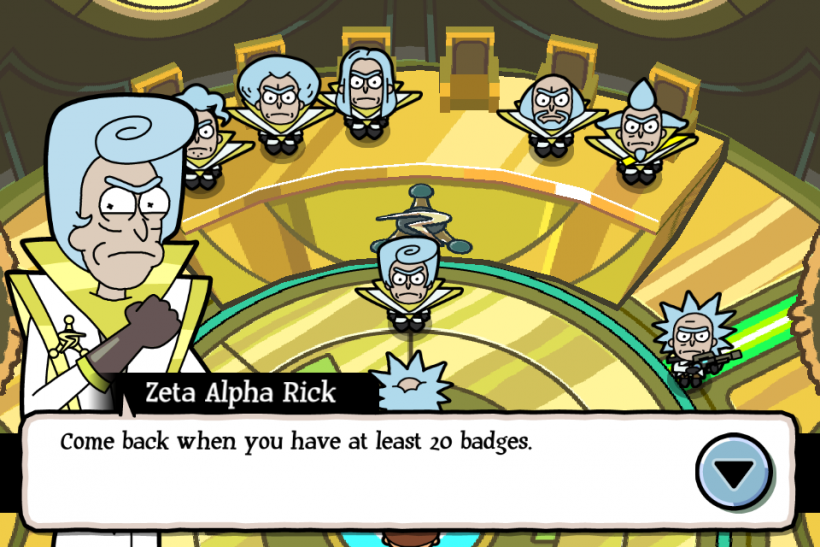 Adult Swim's Pokémon parody has taken the Apple App Store by storm. After releasing one day early, it has dethroned Candy Crush Jelly Saga as the number one app on the App Store charts. It is also one of the best games released so far this year. Pocket Mortys begins with Rick and Morty discovering that everyone has gone crazy over a new hobby -- collecting Mortys. Like Ash with Pikachu, Rick sets off with his Morty on an adventure to build the best team of Mortys and become the best trainer in the multiverse.

The game is played just like Pokémon, but with a Rick and Morty twist. After losing your portal gun to the Council of Ricks, your Rick must use a central portal to travel to random dimensions to win badges. Along the way you will battle other trainers, collect random garbage and most importantly catch wild Mortys to train and battle.

To catch a wild Morty you must wear the Morty down in battle then use a Manipulator Chip (think Poké Ball) to control him. There are over 70 Mortys (Morty List) to capture, 82 total with rare or evolved Mortys . They include simple Mortys, such as Mustache Morty, to mysterious Mortys, such as Egg Morty. You can also win additional Mortys at Blips and Chitz, from completing side quests or by combining Mortys to make a more powerful Morty.

The battling system is exactly like Pokémon except the Morty types, like water or rock type Pokémon, are a lot easier to learn. Each Morty has a type, fighting stats (HP, Attack, Defense, Speed), a level, four attack or defensive moves and a certain amount of Attack Power (AP). The Morty class system simply follows Rock, Paper Scissors, meaning a Rock type Morty will have an advantage over a Paper type Morty. The battles are one-on-one turned based where each trainer selects one move then leaves the outcome up to chance. You can choose to attack with your Morty, use and item, tag out or run. You win a battle when all of opponent's Mortys are dazed and he can no longer fight. 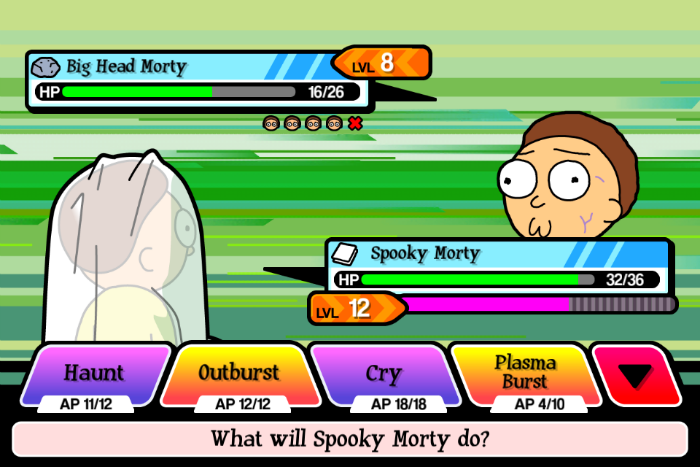 Another important part of the game is crafting. Rick will find and win random junk like discarded batteries (very important), tin cans and so on. You can use this junk to craft new items such as healing serums, chips and even a Gwendolyn Doll. Crafting items is important because it saves you Schmeckles and you will need them to complete your side quests. You can see a complete list of crafting recipes here in case you get stuck.

If you do not like Final Fantasy role playing type of games then Pocket Mortys is not the app for you. The goal of the game is to collect and train all 70 Mortys while completing the main story. This involves a lot of hoarding items and trying to earn experience to level up. Completists who enjoy collecting things and checking off lists will love this game. There are so many Mortys to collect, items to discover, side quests to complete and mysteries to solve you will be addicted in seconds.

Rick and Morty fans will also love this game. It is full of references, characters and places from the show, however, people who have not seen the show will also enjoy the game. It is quirky, full of colorful characters and a lot of fun to play. It is also not bogged down with a lot of cut scenes that will fly over non-Rick and Morty fans, and anyone will be able to follow the story. It is hard to believe that Pocket Mortys won't be on a lot of Top Ten lists this year, especially if Adult Swim keeps it updated with fresh adventures and new Mortys to collect. 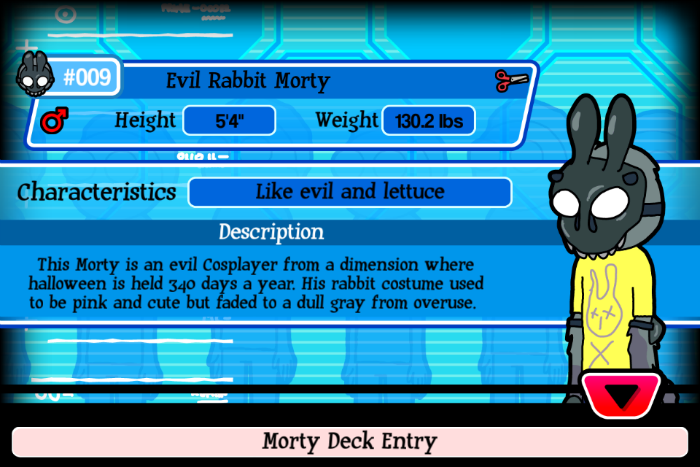 Pocket Mortys is available for free on the Apple App Store and Google Play. I need to stress this game is completely free -- no timers, no tricks, no real world money needs to be spent to enjoy it. The game does include IAPs for additional coupons, which are tempting to buy, but not necessary. It supports all devices running iOS 8.0 or later and it works on older devices such as the iPhone 4s.

We have also been adding lots of Pocket Morty tips to our FAQ section. Here are a few examples.

Those of you who want to watch Rick and Morty seasons 1 and 2 can do so on Adult Swim's website (cable subsctiprion required) or you can purchase them on Blu-ray.