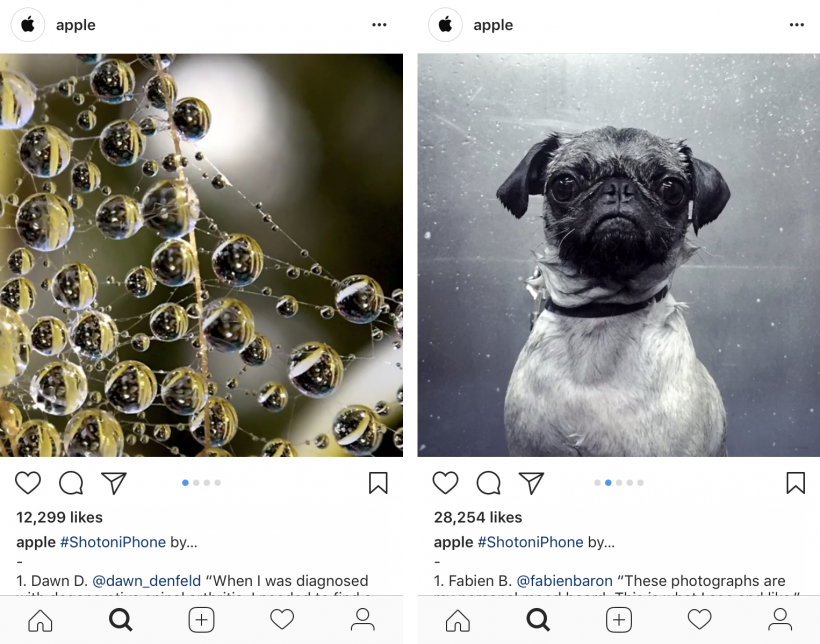 Apple has been expanding its "Shot on iPhone" ad campaign for some time through various media channels. Now the company has launched an official Instagram page at @apple to showcase iPhone images. The photos come from iPhone users across the globe. Apple says anyone using the hashtag #ShotoniPhone will put their photos in the running to be featured on @apple.

So far, Apple highlights several selections from almost 40 different photographers. The company has also produced a promotional video that is running in sponsored posts on Instagram. Until now, Apple has only used Instagram for advertising, however the new account will not be used to share ads for its products. The @apple account already has hundreds of thousands of followers. Apple also maintains the @applemusic account on Instagram, which boasts 2.2 million followers.

Apple has been heavily emphasizing the photographic capabilities of its recent iPhones, as well as their video recording quality. The focus has also been on teaching its customers how to best utilize an iPhone camera, with several online tutorials available and in-store workshops being offered. Apple continues to improve the iPhone camera with each annual update.

The 10th-anniversary iPhone 8 will be no different, with significant improvements such as 60 fps 4K video recording in the pipeline. The upcoming device is also rumored to support 4K video recording on the front-facing camera, and advanced augmented reality (AR) technology.

For its part, Instagram has faithfully updated its iOS app since the company was acquired by Facebook in 2012. Increased image resolution, a flat interface design, iOS share sheet compatibility, video stabilization, stickers and Stories have been just a few of the new features offered to Instagram users over the years.