UPDATE: How to block calls and text messages with iOS 7.

One of the biggest features lacking on the iPhone is the ability to block incoming calls from specific people. Previously you needed a jailbroken device and an app called iBlacklist to block calls, but soon everyone will be able to stop their exes or bill collectors from contacting them. Developers found a new "Block Contact" option in the recently released iOS 7 beta. The new feature allows you to block phone calls, FaceTime calls and messages from a specific contact listed in your Phone app. 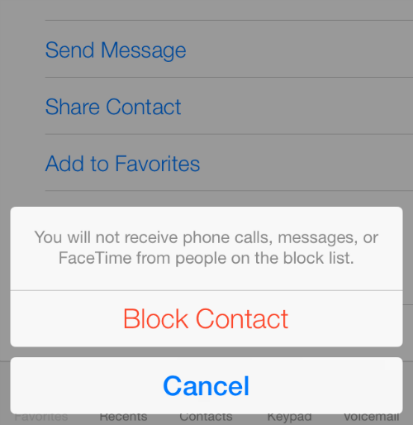 You can easily remove people from your blocked caller list by going to their contact screen via the Phone app. There is a "Unblock this Caller" option at the bottom of each individual contact card that has been blocked. Just tap the "Unblock" button and you will be able to receive calls from that specific person again. This is a great option for on-again, off-again relationships, and a new way to identify and ignore telemarketers.

Call blocking was one of the new features not covered by Apple during its keynote on Monday. However, it was briefly mentioned in the official iOS 7 press release.

This is rubbish. This does not block unwanted calls. You have to create a contact on your phone (FOR THE PERSON/UNKNOWN PERSON YOU DON'T EVER WANT TO SPEAK TO!).
Thus you'll just end up with a contact list of bloated idiots you care nothing about.....

C'mon peopl e- think this through and give the population what they need, not what YOU think they want.....

Agree with the comment above (this is rubbish) if this is the solution in IOS 7...

People need to be able to block any 'unknown' callers without adding a crazy contact list for my phone....Heading over to another phone option if this can't be figured out on the iPhone. Grr...

I take it If you know the number, and it's in your contact list you can block it. Correct? Phone companies charge for this feature. I like it!

Dude, we went from not being able to black calls at all to being able to, at least, block incoming calls from people on the contact list. I think this is something. Maybe it'll be the way we want on iOS 12. Let's keep our hopes up!

Of course you could.
Create an entry, call it Blocked
Add the phone numbers you don't want to hear.
Add a silent ringtone.

So the new method isn't much different.

I have IOS7 - You cant just add a number in settings/phone/blocked; you have to actually select a contact.

Under recent calls, clicking the "i" for information allows you to block calls from that phone number without creating a contact.

Just e-thinking this through and finding what I need.

Thank you. Just did it and it works

Your comment is total BS
This upgrade is tremendous. The sky is the limit with what you could do with this. I love the way you can block/unblock easily. They dont know they are being blocked. Phone goes straight to voicemail into a category called blocked calls. So you can listen if you want to. Im using it right now to get thru a breakup but i dont want to drive him too crazy. He thinks im getting his messages. Ill just tell him my phone was malfunctioning (until he figures out this upgrade exists) once im thru the worst.

since you can have multiple phone numbers in 1 contact all you have to do is just create 1 contact called "unwanted caller" and block that contact.. From your recent calls you can select "add to existing contact" to add a new number to your unwanted caller contact

I'm glad they finally added this feature to iOS 7 however, there is a major flaw. Blocked calls aren't actually blocked and after 2 rings they go to your voice mail. The point of blocking calls is that you do not want ANY contact from that caller. Why then would I want them to leave a message? They should receive a busy signal after two rings or it should simply disconnect after. Come on Apple, it's not that hard to understand!

In IOS7 you can only block a call when that person is in your contacts list. What is needed is an option to just block that number. I do not want all the numbers from telemarketers in my contact list just so I can block them. Come on guys there has to be a better way.

Tap <>, recents (if they called you already) find them, click on the information mark, scroll to bottom, click BLOCK CALLER. you whining for no reason... princess

Sorry princess, that won't work.
If the caller is labeled "unknown", the option to block that number is not there.
Try having someone call you from a blocked number and try it for yourself.
The only way you can block a number is only when a number is given.
Better get your facts straight or look like a fool.
People are whining for a reason, apologize to them.