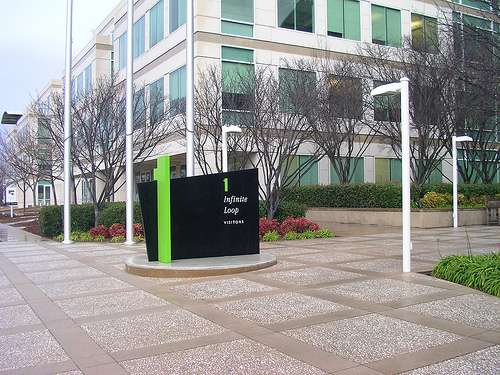 Apple (NASDAQ: AAPL) stock had a tough week, dropping to prices not seen since January. After opening the week at $121.50, share prices dropped precipitously on Tuesday and closed at $114.64 (and then dropped further to $112.95 in after hours trading). A bit was gained back on Wednesday after hitting the weekly low of $112.10 during trading. Share prices then leveled off for the rest of the week, closing Friday's session at $115.52 for about a 5% loss on the week.

Company stock has fallen off ever since its third quarter earnings were released a few weeks ago. Despite a record Q3, the numbers didn't hit the high marks set by many analysts, which has apparently worried investors. This week's poor performance prompted Bank of America Merill Lynch to downgrade Apple stock to "neutral" and lower their target price to $130 from $142. The firm's analysts cited several reasons, including the slowdown in the Chinese market and in iPhone 6 sales, and tempered expectations for the iPhone 6s launch.

Apple, however, seems very bullish about its next generation iPhone, and has ordered a record number of handsets from its supply chain. The company has also scheduled the launch event for the week of September 7, most likely on the 9th, according to sources familiar with Apple. Along with the new iPhone, the company will likely unveil the new Apple TV and the iPad Pro as well.

As it should, this has many analysts bullish about the near future, despite the recent woes. Analyst Steve Milunovich of UBS believes the launch should push iPhone sales to a 49 million, which would be a September quarter record for Apple. He maintained a "buy" recommendation and a price target of $150.

Analysts Daniel Ives of FBR Capital Markets believes Apple's 9.6% slide since announcing its Q3 results presents a perfect opportunity to buy. He sees a very successful iPhone 6s launch, huge demand in China and new products that should drive growth for the next year. He maintains an "outperform" rating and a $175 target price.

Amit Daryanani of RBC Capital also maintains an "outperform" rating for the same reasons. He believes Apple's 40.9% year-over-year increase in manufacturing commitments and component purchases points to not only a massive iPhone 6s launch, but debuts for several new products as well. He maintains a $150 target price.

With much of the attention going to the new iPhone and other new products, Macquarie Securities believes Wall Street has overlooked the App Store. Analyst Ben Schachter points out that the App Store is Apple's fastest growing profit driver and will account for 45% of the company's operating profit growth this year. He believes it could account for a quarter of Apple's earnings by 2017.

Apple will pay out a $.52 dividend this Thursday, August 13, to all stockholders of record as of today, August 10.