How to restore the iOS 7 app switcher 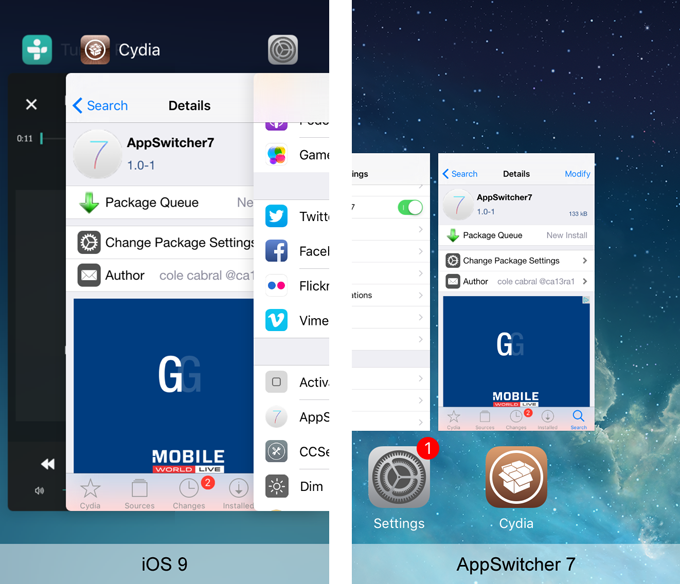 The iOS 9 app switcher is not without its faults. Some iPhone owners, especially those with smaller screens, have complained that switching apps is difficult. The problem arises due to overlapping app cards combined with overly fluid motion. Sometimes scrolling between apps results in having to go back and forth several times, as the targeted app card is missed or floats by too quickly. The jailbreak tweak AppSwitcher7 solves these problems by resurrecting a previous app switcher design.

AppSwitcher7 reverts the app switcher back to the days of iOS 7. Remember the clear, non overlapping app cards accompanied by a large icon at the bottom? Once installed, there's a single toggle under Settings to enable the tweak. Changing the appearance and behavior of the app switcher between iOS 7 and iOS 9 requires a respring. Watch out when using other app switcher tweaks, such as Slide2Kill 9. These may not be compatible with AppSwitcher7.

When it comes to iOS app switcher modifications, the big names like Auxo may add a bevy of new features along with total redesigns of multitasking. The mission of AppSwitcher7 is much simpler. Much like how VintageSwitcher restores the iOS 6 app switcher, AppSwitcher7 returns this part of iOS to an earlier time.

AppSwitcher7 is free on the Cydia app store and requires iOS 9 or later. To start customizing iOS, click here for instructions on how to jailbreak iOS 9 with Pangu. Find out how to purchase and install Cydia tweaks with this guide.