The jailbreak tweak Stratos is heavily inspired by the classic multitasking tweak Auxo. The developers of Stratos have included some interesting features in their vision of iOS 7 and 8 multitasking. The tweak is described as a way to "simplify the way you interact with your iPhone". Simply put, Stratos brings a multitasking app switcher to the Control Center and separates media controls, app switching, and control toggles into three separate pages. 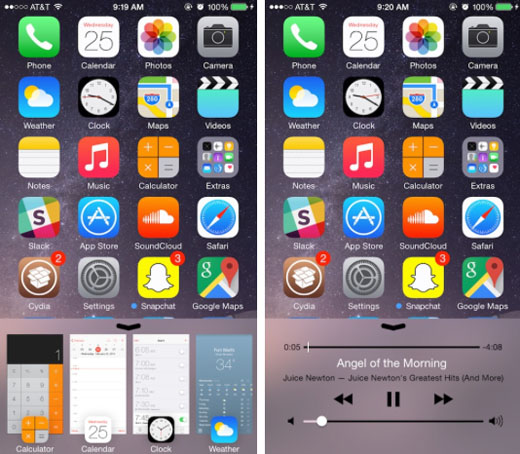 Once installed, there is a toggle to enable Stratos under Settings, along with many options to configure the tweak. Besides displaying running and recently used app cards directly in the Control Center, Stratos makes it possible to swipe up on an app card to open it immediately. Stratos can be configured to automatically open to the media control page when music is playing, and this is just the tip of the iceberg.

There are a variety of toggles to customize specific functions under Settings. The height can be adjusted to control the size of the Stratos interface, which changes the amount of screen real estate covered by Control Center. Background styles bring extra customization to Stratos. Variations including Dark, Dock Blur, Common Blur, CC Style, and Light can be selected for different effects. 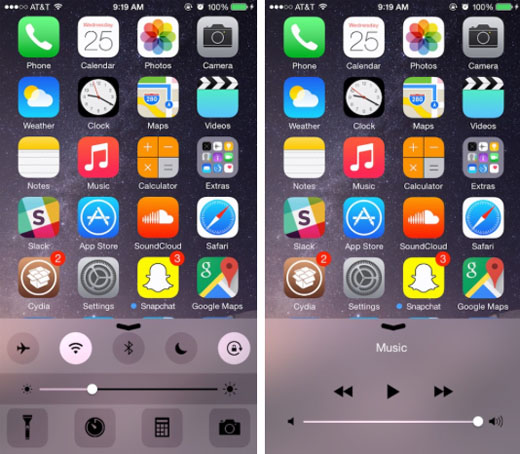 One interesting feature is named Page per third of screen. When this option is enabled, swiping up in different places will bring the user directly to a specific page. For example, invoke the Control Center by swiping up in the middle, and media controls are revealed. Shortcut directly to the app switcher by swiping up on the right third of the screen, or pull up Control Center toggles using the left third. This method is even faster than swiping to different pages within Stratos.

Stratos is available from the BigBoss repo on Cydia for $1.99. To start customizing iOS, click here for instructions on jailbreaking iOS 8.0-8.1.2. Those with older firmware can jailbreak with Pangu (iOS 7.1) or evasi0n 7 (iOS 7.0). Find out how to purchase and install Cydia tweaks with this guide.