How to assemble the chopper in Last Day On Earth 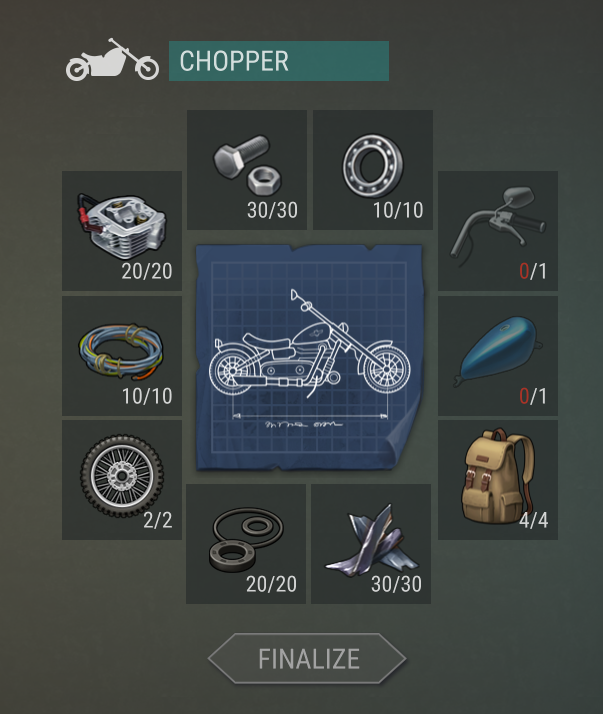 Update: In a video (see below) posted to Facebook on 7/21/17 the developers revealed that the final chopper parts will be made available in a future update. The update will include the ability to acquire the pass code to the locked areas in the bunkers. These areas will include the final two parts players need to assemble the chopper, new weapons such as a mini-gun and AK-47, gas and different color paint.

Last Day On Earth is a highly recommended zombie survival game currently available on the Apple App Store, Google Play and Steam. The game has become something of a cult hit due to its deep gameplay and huge potential. The major problem with Last Day is it "still in the beta-testing phase," according to the developer. This not only means certain mechanics might not work in the game, but the game is actually incomplete. It is as if the developer did not expect the Last Day to catch on so fast, or that players would log in enough hours to advance so quickly in the game.

The goal of Last Day is to build a home base to fend off zombie hordes and other survivors. You do this by collecting resources to craft supplies and tools that will help you survive. As you advance in the game, you can begin to craft more complex items, such as a melting furnace for making different types of metal building materials. However, advance tools require advanced resources, and you will eventually need to travel further on the game map to find what you need.

Update: According to comments posted on Facebook, the chopper does not help you reach new destinations. To reach new areas on the map you will need to assemble the ATV. 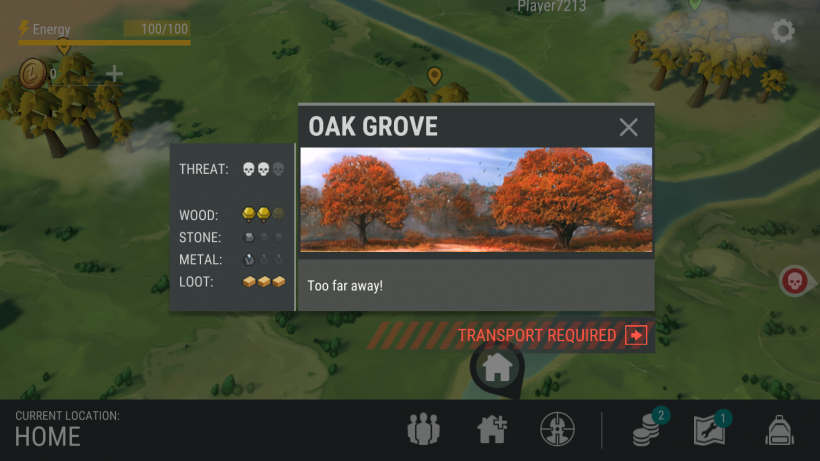 This is a major problem since some of the items you need to advance in the game don’t seem to be available. There has been no official word from the developer, but it seems like lots of players are stuck at the same place -- assembling the chopper. You need a vehicle to reach the further areas on the map, and the obvious choice is to build a motorcycle. This requires that you reach a certain level, have a plank floor big enough to accommodate the chopper and that you collect a lot, and I mean a lot, of supplies. While most of the supplies, such as engine parts and ball bearings, can be easily found inside crates in forests and quarries, two pieces don’t seem to exist. Nobody seems to know where or how you find the chopper fork and gas tank, two items you will need to finish the motorcycle.

Gaming forums are full of all types of rumors on how to acquire these items, and there are a few misleading YouTube videos floating around, but the correct answer seems to be that neither of these parts actually exist in the game. The developer just hasn’t added the fork or gas tank yet. This is even more frustrating since version 1.4.6 of Last Day actually changed the chopper crafting recipe (you now need four backpacks) and added more chopper color options that nobody can actually use.

Some players claim you can buy the parts with real money in the game’s store, but I don’t see any packs that list chopper parts as part of their inventory. Others claim you can find the missing parts in plane crashes, or in areas that don’t seem to exist. And no, you can’t steal the parts from the unfinished chopper at the NPC forts. Trust me I tried.

It is hard to believe that the developer will let the problem linger much longer, There are a sea of comments complaining about the missing parts on the official Facebook page. Even if the parts do exist there is no denying that they're impossible to find.

Last Day has been updated at least twice since I’ve first downloaded the game a few weeks ago. Hopefully the development team is planning to add or make the chopper parts easier to locate soon. I’m not sure why the chopper parts do not exist or are so hard to find, but you’re not the only one frustrated by the issue. Some players seem to think it is a money play since Last Day is a freemium title that relies on IAPs. If this is the case, I beg the developers to figure out a better way to make money. For example, they could make the final chopper parts available for $0.99. I know forcing to players to pay to play is frowned upon, but you could view it as paying a small price to unlock the rest of an awesome game.

Whatever they decide to do, I just hope they do it soon because Last Day is a great game that needs to be completed.