One Hour One Life updated with new content, join the fun 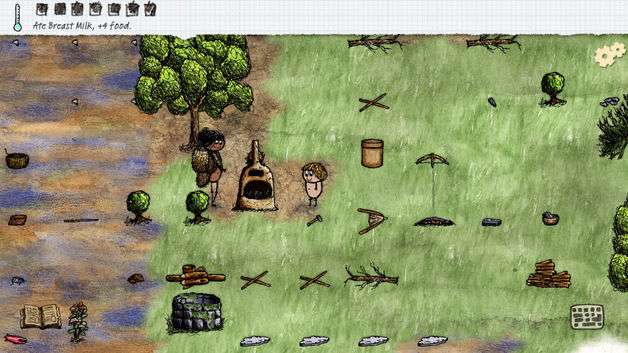 We were a bit confused when One Hour One Life originally hit the App Store, but now that we've had more than a few weeks to play we are hoping more people discover the game. The goal of One Hour One Life is to craft and build a civilization. To do this you need many players to work together. This is typically hard to do because not only do you need people to pay to download the game, but you also need a specific type of player who is interested in crafting. Perhaps One Hour One Life might fare a little better as a freemium title with IAPs, but I digress.

One Hour One Life is a bit hard to explain. You die a lot, but can be reborn over and over either as a woman or baby. As a woman you need to craft items in hopes to pass them down to your children. As a baby you must rely on your mother to stay alive the first 3 years (1 minute = 1 year) of your life. If you survive the first 3 years, you can then start crafting and hopefully raise your own family. Sometimes you will spawn alone with nothing, and sometimes you will inherit the objects crafted by generations before you. The idea is if enough people play, survive, and craft, then an advanced civilization will eventually be created.

One Hour One Life is a very deep game. You can create all kinds of objects starting with basic tools like a rock. The best part is if you keep trying, the more you will learn. You can do this by watching others, or by doing a little reverse engineering. The game includes a digital book with all the recipes, but it's harder than it sounds. You need to survive, while collecting the basic items you need to build one object to create another. The game works best when you have a family who sticks together, but most times you will find yourself all alone surrounded by a lot of graves.

Another great part about about the game is that the developers listen to feedback and have updated One Hour One Life with little fixes to make it better. In my original review I complained about the controls when trying to eat food. Originally you had to use clunky swipe controls to eat something, but an easy to use "Eat" button has since been added.

The latest version (v. 1.3.0) includes new content such as being able to breed dogs and puppies, plant trees, grow bonsai trees and more. A "Cursing" system has also been added. Players can now put a curse on badly behaved players. A person with too many curses will be punished in the game until they redeem themselves.

I hope One Hour One Life finds the audience it needs to survive on mobile. If you enjoy crafting game then please check this one out. It is available for $4.99 on the App Store.