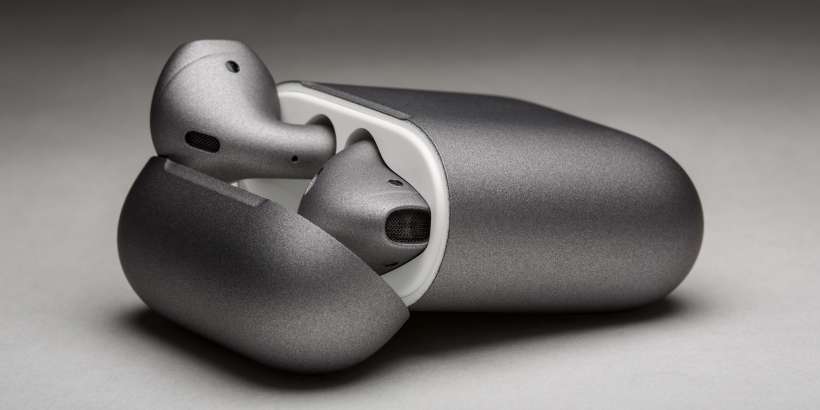 Apple is set to deliver redesigned AirPods with hardware upgrades for the first time since the wireless ear buds launched in 2016. Reports have been surfacing from the supply chain and elsewhere, pointing to what's ahead for AirPods 2, and when they might arrive for purchase. Here's a roundup of what's expected from the next generation AirPods.

Various sources have pointed to Apple offering AirPods 2 in both black and white colors. Companies such as ColorWare have offered many custom colors for current model AirPods. In fact, pictured above are ColorWare Space Gray AirPods with a matte surface. Apple may jump into the game with black AirPods and a matching charging case.

Besides a new color, Apple has reportedly added a matte finish to AirPods 2, which provides better grip. This surface finish is said to be applied to both the ear buds themselves as well as the charging case.

Digitimes and Bloomberg both reported that health sensors may be added to AirPods 2, such as heart rate monitors. It's not clear whether this technology would involve changing the size of AirPods 2. Other details about which sensors would be useful to have on wireless headphones remain to be seen, however adding health functions to AirPods 2 could complement health features on the Apple Watch and iPhone.

Apple's W1 chip made waves when it was first introduced, promising to improve audio quality and connectivity with Apple devices. AirPods 2 will feature the updated W2 chip, which can already be found on the latest Apple Watch. Along with the W2 will be on board Bluetooth 5.0 support.

Hey Siri will be added to AirPods with iOS 12.2. Not only will this feature be available on AirPods 2, but existing AirPods can enjoy using Hey Siri after performing a software update on paired devices.

How much will AirPods 2 cost?

Reports have varied on pricing for AirPods 2. Some have said Apple will keep pricing level at $159, matching the first generation AirPods. Others, such as the Economic Daily News say that AirPods 2 will carry a price increase to $199. It's possible the wireless charging case will be an option, driving up the price for that particular configuration.

When will AirPods 2 be available?

AirPods 2 are expected to launch in the first half of 2019, according to TF International Securities analyst Ming-Chi Kuo. Kuo has a reliable track record, and this date meshes with the fact that Apple supplier Inventec has reportedly begun manufacturing AirPods 2. Other reports point to a later release date. Sources talking to Onleaks say AirPods 2 will not be available until the fall.

Look for more news at Apple's upcoming March 25 media event. While Apple is expected to focus heavily on its streaming video and news subscription services, it's likely that hardware including AirPods 2 and AirPower will make an appearance.