Thanks to iPhone Dev-Team the redsn0w jailbreak tool is updated to jailbreak the iPhone 4 and iPhone 3GS running iOS 5. This is a work in progress designed to help app developers update their products for the latest firmware. As such, Dev-Team considers redsn0w a beta release and warns early adopters there may be lingering bugs in the firmware.

Before you go ahead and read the tutorial, be aware this does not apply to the iPhone 4S or iPad 2. Jailbreak solutions for these two devices are under development and have not been released. When it comes to the iPhone 4 and 3GS, most devices will require a tethered jailbreak.

One of the features highlighted by Apple in iOS 5 is the addition of a camera button on the lock screen. This makes it possible to quickly access the Camera app without having to unlock the iPhone and find the icon on your home screen. 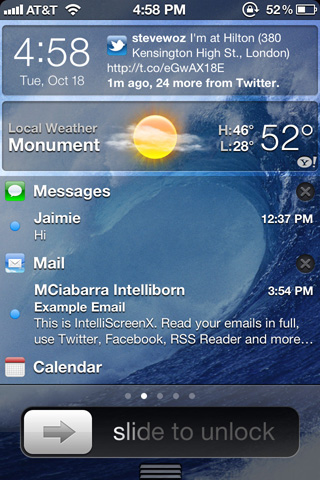 Like it's predecessor in Intelliscreen, IntelliscreenX's main purpose to to allow you to put all sorts of useful information on your lock screen. However, this latest incarnation does so by leveraging Apple's already excellent Notification Center, first and foremost by allowing Notification Center to be seen where it is most useful.

In case you hadn't noticed, Apple has replaced the orange iPod app marked "iPod" with a completely new icon and label. Don't go looking for the iPod icon, it's no longer there.

UPDATE: Now you can hide Newsstand in a folder using StifleStand. The software for Mac or Windows computers can be downloaded free and is compatible with all iOS 5 and iOS 6 devices.

Some users have complained that iOS 5 will not let them put the iPhone Newsstand app icon into a folder for safekeeping. For those who don't plan to use the Newsstand application or would like to organize this app in a folder, read on because there is a workaround.