The Corona 5.0.1 Untether package has received another update, this time to correct an iBooks problem where images failed to display or displayed incorrectly after installation. Chronic Dev Team released Corona 5.0.1 Untether to free tethered jailbroken devices including the iPhone 4 from the need to reboot with a computer.

After installing early releases of both Corona and the redsn0w jailbreak for iPhone 4 and 3GS devices, some users had problems with iBooks including a Configuration Error dialog. The latest version of Corona (1.0-7) should fix both iBooks errors and can be installed directly from Cydia on a jailbroken device.

Some users have experienced an issue when dialing out on the iPhone 4S. Outgoing calls sometimes will result in the caller not hearing any audio, including the other line ringing. Apple has not addressed the issue, however there are some temporary fixed that might work for your device.

If the problem persists, you may be able to ask for a hardware replacement at the Apple Store Genius Bar. Before this happens make sure you have tried to completely restore your iPhone 4S. Here are some temporary fixes to try:

UPDATE: iPhone developer pod2g blogged that an upcoming Corona update will fix "iBooks and other softwares having sandbox issues." We will let you know when it's released.

When jailbreaking iOS there are sometimes caveats and unintended consequences, although normally for enthusiasts the advantages of running new software take precedence. iBooks fans might have found that after liberating their device with the latest redsn0w untethered iOS 5.0.1 jailbreak that iBooks ceases to work. 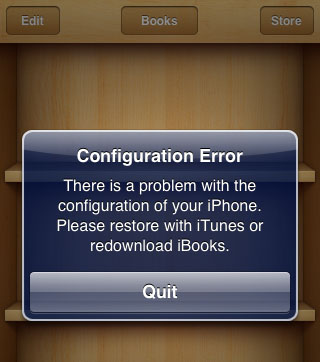 Now there's a package available in Cydia that should fix the problem. Some users have reported no luck with the fix, but our team was able to fix iBooks using the procedure below. As always, jailbreaking and installing non-Apple packages is performed on your iPhone at your own risk! Here are instructions to fix iBooks after jailbreaking.

If you need to restore the iPhone to its original state the process requires iTunes. This can be useful for troubleshooting to see if a problem is hardware or software related. The process can also reset an iPhone for resale, wiping all personal data from the device.

Should you suspect a hardware issue with your iOS device, Apple will normally recommend a complete restore to see if this clears up the problem. You can save time when you go to the Apple store by trying a complete restore first. Restoring will update your iPhone firmware to the latest version.