According to the Wall Street Journal, short lines and quiet Verizon Wireless retail stores are misleading when it comes to iPhone 4 sales. Verizon CEO Daniel Mead responded to allegations that the iPhone 4 launch was a flop, explaining that it has outsold any other device release in Verizon Wireless history.

Staggering the pre-order dates, a strong online sales focus, and wide availability at third party retailers such as Best Buy helped contribute to the small lines. Official sales numbers have not been released, but analysts put the figure of CDMA iPhone 4 units sold in the first pre-order round at half a million. Verizon's next quarterly report will include updates on actual sales quantities. 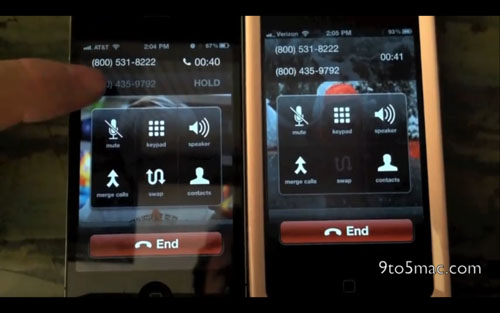 Antennagate could be coming to a Verizon Wireless location near you. Turns out when Apple said any changes to the Verizon iPhone 4 antenna were simply to accommodate the CDMA network, they meant it. Some were hopeful that visible changes in the external antenna design would improve reception problems when the phone is gripped in specific ways.

Now that the Verizon iPhone has made its way into the hands of consumers there are reports of the same reception issues that AT&T customers experienced. Holding the iPhone in specific ways that cover the sides of the device cause a drop in signal strength due to the external design of the antenna.

Now that the Verizon Wireless iPhone 4 has hit the streets, people have started taking it apart to see what makes the device tick. iFixyouri performed a teardown and reveals that the latest Apple handset is shipping with the Qualcomm Gobi MDM6600 dual-mode 3G modem. Currently the chip is only being used for Verizon's CDMA network, as GSM functionality requires a SIM card.

Rumors were flying ahead of the Verizon iPhone 4 release that Apple would launch a hybrid device capable of operating on a variety of networks. Now analysts expect the iPhone 5 and iPad 2 will also use the Qualcomm chip, designed to work on both AT&T and Verizon 3G networks as well as networks around the globe.